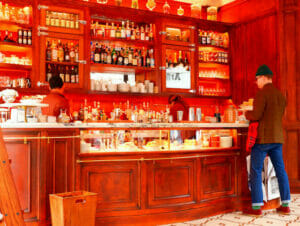 Do you want to go on a solo trip to New York? You can safely do so! New York is the perfect place to travel to on your own, and it’s very common to go shopping, go to a concert or dine in a restaurant on your own. The city is full of singles, and the locals also like to do things on their own as a welcome respite from their busy lives. No one will bat an eyelid at you for being on your own. It’s also a very safe city with many opportunities for meeting new people.

New York is perfectly suited for a solo trip. It’s easy to navigate and get around in the city, and with so many things to do, there’s no way you’ll be bored. Being a solo traveller in New York also has its advantages: You won’t have to compromise on which attractions to visit, how many hours you can spend shopping or which restaurants to dine in!

New Yorkers are known for being friendly and chatty, and if you want to meet other people, you can, for example, choose to stay at a hostel or go on a Rooftop Bar Tour. In other words, there’s no reason to be bored or feel lonely.

Things to do on a solo trip to New York

New York offers endless possibilities, also for solo travellers, so it’s most likely only your budget setting the limit on what you can do.

I always recommend buying a New York discount pass, and it’s also very advantageous for solo travellers. It’s the cheapest and easiest way to visit attractions, and the discount passes give access to many of the top attractions in New York. I can also recommend watching a Broadway show and attending a sports game. If you’d like to strike up a conversation with the locals, then a baseball game is a good choice. The baseball games are often long, so you’ll have plenty of time for a chat over a cold beer.

It’s very common to dine by yourself in New York, also in restaurants. Although it’s not a requirement, it’s most common to sit at the bar when you go to a restaurant on your own. At the bar, you can also strike up a conversation with the friendly staff or other diners. If you prefer more casual dining, then you have plenty of cafés and coffee shops to choose from as well, of course. You can also just buy some food on the go and enjoy your meal in one of the many parks in New York.

If you’d like to experience the New York nightlife in the company of others, then I recommend the Nightclub Experience and the Rooftop Bar Tour mentioned above. The Alive After Five Cruise is also a nice option and a good opportunity for meeting new people while enjoying the Manhattan skyline and a refreshing drink.

For transfer from the New York airport to your hotel, I recommend booking a shuttle bus ticket. It’s a cheap and easy solution, and you won’t have to worry about finding your way, as the bus will take you directly to your hotel.

Another tip is to buy a MetroCard for the NYC subway since it’s a quick and cheap way to get around the city. Don’t take the subway late at night when you’re travelling alone, however, but take a cab instead.

Midtown Manhattan is a good place to stay as many attractions are within walking distance. You can therefore do things near your hotel and avoid taking the subway late at night. Pod Hotel 51 and Pod Hotel 39 are good choices for a solo trip to New York since they offer good prices and the opportunity to meet other travellers in the common areas. Yotel is also very suitable for solo travellers. I especially recommend citizenM Times Square and citizenM Bowery, two of my favourite New York hotels. They offer a comfortable stay with all the necessary facilities, and both have a nice rooftop bar where you can relax in style after a day of sightseeing.

Are you looking for a cheaper stay? Then I recommend a hotel in Long Island City. It’s a cheaper alternative, and you can easily take the subway to Midtown Manhattan from there. At night, however, it’s best to take a cab to your hotel in Long Island City rather than using public transport. A hostel in Midtown Manhattan is also worth considering for a budget-friendly stay with the opportunity to meet fellow travellers. HI NYC Hostel on Amsterdam Ave, for instance, often organises activities, so it’s a good place to meet new people.

You don’t have to worry about your safety in New York if you’re a woman travelling on your own. Generally speaking, it’s a very safe city. You should, however, take some precautions like in other big cities. Use your common sense and be aware of your surroundings. Do not walk through the parks at night and avoid dark and deserted areas. Make sure you take a cab rather than using public transport at night.

It’s a good idea to choose a hotel or hostel in Midtown Manhattan, where the city lives up to its nickname: the city that never sleeps. People and bright lights fill the streets in the city centre at all hours of the day, making it safer to walk the streets here at night than in certain other New York neighbourhoods. It’s worth spending the extra money on a centrally located hotel, so you can avoid travelling long distances at night. It’s fine as long as your hotel is located below 90th Street.

Is it safe to travel alone in New York?

Yes! New York is a very safe city, so you can safely travel there alone. Like in other big cities, there are a few precautions you should take. Read more here.

What to do in NYC if you are alone?

The possibilities are endless! You can go shopping, on a rooftop bar tour or watch a Broadway show or sports game, and so much more. Read all my tips for a solo trip to New York here.