See the New York subways running live on this map! 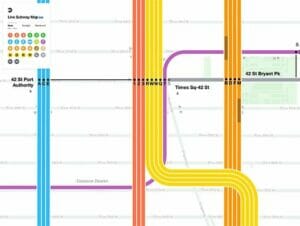 A Live New York Subway Map is available from this week! When you’re in New York for the first time, it often takes some getting used to: taking the subway. Northbound, Southbound, the A- C or E-train, blue, red and green lines… Not to mention the subway stations, with exits in all directions, gates that open only one way and swipe systems that don’t always do what you want.

Want to stay up to date with all the New York news? Sign up here.

This new online live map of all New York subway lines is real time so you can even see where the subways are right at this moment! Every day (especially on weekends) there is construction work or obstructions somewhere on some lines of the New York subway. A station can be clicked on this new map and you will immediately see what is going on at that moment. Short term activities are also indicated, such as construction works in the upcoming weekend. This new map works on both a desktop and mobile. There is currently no app.

Some features of the MTA Live Subway Map beta are:

– Accurate: The metro lines are updated automatically. The metro routes will redraw themselves using real-time data to show the current accurate status. Sections of lines fade when a train is not running there and are indicated by dashes when trains run in a single direction.
– Trains in motion: Trains will be shown moving on the map, with their current location.
– Zoom function: It is possible to zoom in on the map, to show individual lines, metro entrances, station names and street locations and names.
– Accessibility: The accessibility of the metro is more transparent. Elevators and escalators are more visible on the new map.
– Emergency Alerts: The map uses the MTA data feed to report official MTA emergency communications.
– Airports: The map also shows the airports. By clicking these, users can see how to get there.
– Mobile use: iPhone and Android users can add the map to their home screen for faster access to the map.

The only downside to the map is that it requires internet access, which most New York tourists (outside of their hotel) don’t have. Therefore, I recommend that you always download my free Eric’s New York App, which includes a metro map and information about all the sights.

As for the new Live New York Subway Map, it seems very cool to me that they let the subways run like little trains on the map and if they add the New York subway sounds to this. “Stand clear of the closing doors, please.”