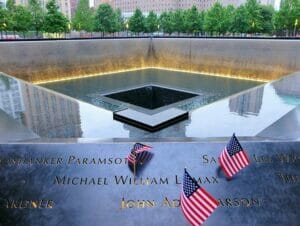 The 9/11 Memorial in New York, is the name of the memorial site at Ground Zero, that was built to honour the victims of the attacks at the World Trade Center in 2001, and, what some people don’t know: also for the victims of the WTC attacks on February the 26th, 1993. The memorial has been open to the public since September 11, 2011, and is freely accessible for anyone who wishes to pay their respects.
Altogether, nearly 3,000 people lost their lives due to these World Trade Center attacks. All of their names, engraved in bronze on the two pools that form the core of the Memorial. The North Pool and the South Pool are built on the exact spots where the twin towers stood. It’s an affecting place, with these two enormous pools, surrounded by trees. Especially in the dark, the feeling of sadness is intense.

Is there an entrance fee for the 9/11 Memorial?

What are the hours of the 9/11 Memorial?

Are there any tours I can take?

Yes, you can take the Official 9/11 Memorial Tour, led by a guide from the 9/11 Memorial and Museum. In 45 minutes, the guide takes you around the reflection pools and informs you of the World Tade Center, the events of the 11th September 2001 and the creation of this memorial.

Yes you can visit the 9/11 Museum. The museum is located on the site of the 9/11 Memorial. In the museum you’ll find a touch screen wall of faces. These are the faces of the victims. By clicking on them you are able to find out more information about any of the individuals. Buy your 9/11 Museum tickets before you leave.

Can I bring a stroller?

Yes, you can bring a stroller to the public areas at the site, as long as it doesn’t obstruct the pedestrian traffic.

Can I bring food or drinks to the 9/11 Memorial?

You may bring a small bottle and a snack with you. Mind that this is quite a quiet place though, where people are expected to behave respectfully. 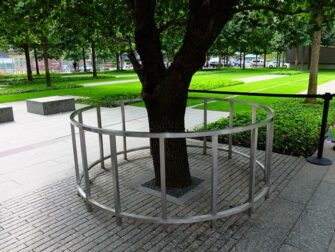 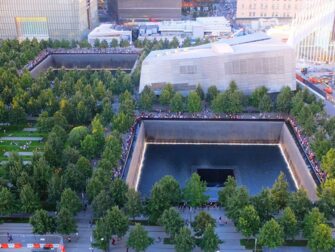 Where can I find more information about the Freedom Tower/One World Trade Center?

On my site, you can read everything about the Freedom Tower/One World Trade Center.

What is the One World Observatory?

One World Observatory is the observatory that’s located on the 100th, 101st and 102nd floors of the One World Trade Center.

Eric’s Tip: I find the 9/11 Memorial very impressive, moving and beautifully designed. Often relatives of the victims from the attacks leave behind cards and photos beside the engraved name of their loved one on the perimeter of the pools. I can easily spend an hour walking around. During the winter months, when it gets dark pretty early (around 16:30), the monument is beautifully lit up. 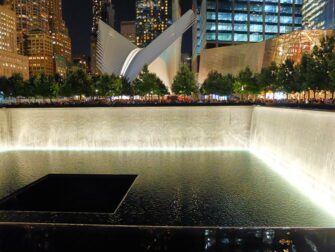 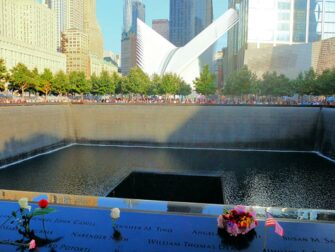 Is the 9/11 Memorial worth visiting?

Yes, the 9/11 Memorial is a very impressive memorial dedicated to the victims of the attacks at the World Trade Center. You can visit during opening hours alone or take a tour. Read my tips.