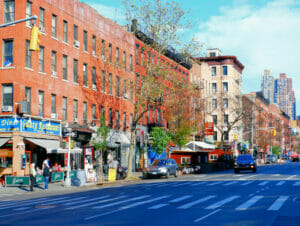 Hell’s Kitchen in New York is the Manhattan neighborhood you will pass through when walking from Times Square to the Hudson. It spans the blocks between Eighth Avenue and the water, with 59th Street on the north border and 34th on the south side. This part of the city is also called “Clinton” or “Midtown West” and has relatively green streets. Hell’s Kitchen is a neighborhood with many characteristic buildings and some iconic New York restaurants.

The Atmosphere in Hell’s Kitchen

Close to many of New York’s major attractions, such as Central Park and the Broadway theaters, the district is a great base for sightseeing in the city. But Hell’s Kitchen is more than just a base, the district itself is also worth exploring. It is a lively, energetic area and a real melting pot; all kinds of people live there, from students to families and from very wealthy to less fortunate citizens. You will hear the footsteps of the carriage horses that have their stables here and a ship’s horn will regularly sound from the cruise ships that dock there. In any case, the adjacent river has a major impact on the district. The Intrepid Museum and the boarding point for the Circle Line are also located here. The Hop-on Hop-off buses also pass Hell’s Kitchen. 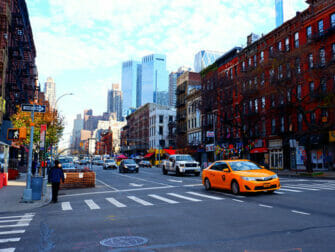 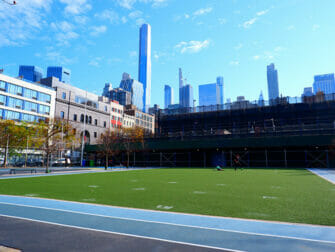 Restaurants abound in Hell’s Kitchen. Especially on 9th Avenue you will find many small-scale eateries and there really is something for everyone. The cuisines and prices are as varied as the people who live here: from Irish to Afghan, from expensive Wagyu steak to pizza slices for a dollar and from Memphis to Marseille.

You can taste the flavours of Marseille in the French brasserie of the same name. In addition to French dishes, there is also a large burger on the menu, the 5 Napkin Burger. It became such an isolated success that “Five Napkin Burger” grew into an independent restaurant and now a chain. Here you will undoubtedly eat one of the tastiest burgers in New York. And then there’s John’s Pizza, one of the best pizzerias in town. This is located on 44th Street, between 8th and 9th Avenues. If you prefer to explore the neighborhood on a guided tour and combine it with local delicacies, be sure to take the Hell’s Kitchen Food Tour.

Eric’s Tip: A nice place for a varied lunch in Hell’s Kitchen is Gotham Market. This food hall consists of a collection of small eateries, with a very diverse range. From tacos to sushi and pizza, everyone will find something to their taste here. 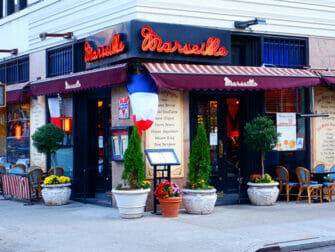 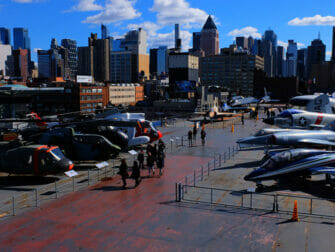 As mentioned, the sights on and near the water play an important role in Hell’s Kitchen. On West 46th Street you will find the Intrepid Sea, Air & Space Museum. Here is the space shuttle Enterprise and the legendary aircraft carrier Intrepid. It’s very special to see this up close. You can board various New York dinner cruises, Circle Line Cruises and other sightseeing cruises at the piers south of the museum. And for those who prefer to stay ashore: you can also rent bicycles here!

Hell’s Kitchen is a neighborhood full of bars and other accessible nightlife. So, if you’re looking for a place to pop in and have a drink, you’re in the right place. There are not that many clubs in Hell’s Kitchen, but all the more wine bars and other small-scale places to enjoy a pleasant evening. Would you still like a slightly more upscale New York night out? Then go to the rooftop bar Press Lounge in the Ink 48 Hotel. Here you can enjoy a cocktail with views over the Hudson on one side and Hell’s Kitchen on the other.

The aforementioned Ink 48 is a nice hotel in Hell’s Kitchen, albeit a little bit “out of the way”. If you prefer to stay a little closer to Midtown and Times Square, the modern Yotel is a good option. A more classic accommodation is Belvedere Hotel on West 48th Street. And two blocks away you will find the luxurious Riu Plaza Hotel, which offers many facilities. 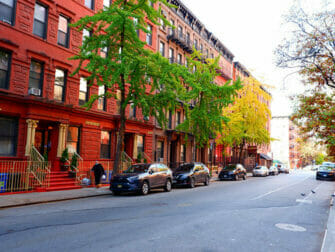