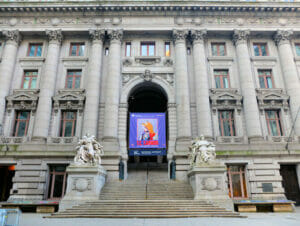 However, there are more reasons to visit the museum. Take subway line 4 or 5 to Bowling Green or subway line 1 to South Ferry. Once above ground, you can’t miss the beautiful building with impressive columns on both sides and an imposing staircase. U.S. Custom House, where the museum is housed, looks like a Greek temple. The building is not only beautiful but has a rich history. Built on the remains of Fort Amsterdam, built by the Dutch in 1625 to protect the nearby harbour of New Amsterdam. It became the meeting place for the Dutch and the Native Americans who exchanged animal skins for knowledge of the seas and trade routes. Unfortunately, this contact wasn’t always peaceful. The English, to whom New Amsterdam was sold in 1664 also had a conflict with the natives. Consequently, the National Museum of American Indian being housed in the U.S. Custom House is no coincidence.

The permanent exhibition “Infinity of Nations” shows the history and art of the various Indian nations. It is but a selection of the millions of objects that the wealthy New Yorker George Gustav Heye (1874 – 1957) collected during his travels through North, South and Central America. Upon entering the museum, at the end of the oval hall, you will find the entrance to this exhibition. Don’t forget to look up before you enter, the ceiling of the oval hall has been beautifully decorated with paintings of the former harbour. Once inside, view the various clothes, utensils and artworks of the Indians, each divided per habitat. 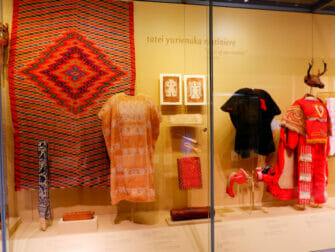 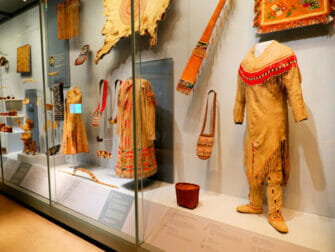 The Omaha Tribe and the Apsáalooke Tribe

Start for example in the middle, where you can learn more about the Omaha tribe and the Apsáalooke tribe from the Midwest of the United States. A very tiny wedding gown is on display from the wealthy Inshata-Theumba of the Omaha tribe. You can also admire a warrior robe from the Apsáalooke tribe that men received when they completed important military tasks during their lifetime. The robe is made from buffalo skin and shows drawings of the accomplishments of the wearer. The robe is one of the two robes that has been preserved. While walking through the exhibition you will observe that different tribes have different styles and utensils. The Seminole tribe used a lot of red whereas the Lakota tribe favoured yellow and blue. Hunting weapons are tailored to different habitats. And where one tribe was primarily interested in woodwork, another completely focused on ceramics and stone. Whoever is interested in such variety should head over to the room on the right side of the oval hall. Modern art from young Indian artists is on display there. You can also enjoy dance and musical performances on a floor lower. Check the program from their website.

All in all, the museum is a fun way to become aware of the origins of modern-day America. Take about an hour to an hour and a half to visit the larger part of the museum. The museum is also great for the kids. In the library next to the entrance they can play educational games, and downstairs Indian stories are told inside a large tipi.

Next to The National Museum of the American Indian, there are many more top New York museums to visit. 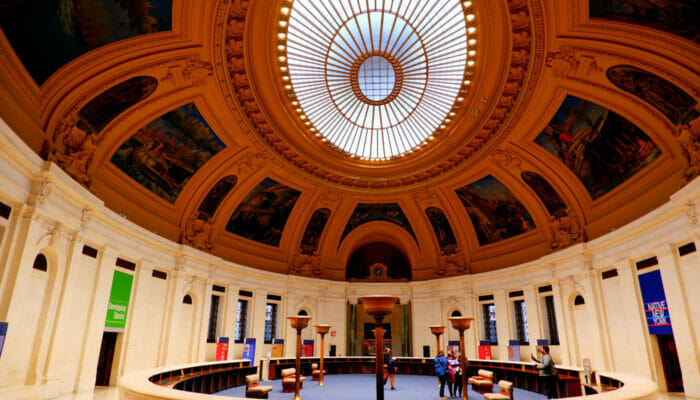