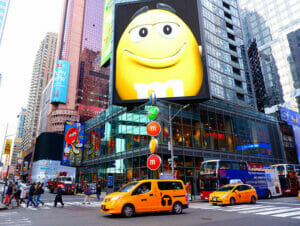 The M&M’s Store on Times Square can’t be missed. The huge store has M&M’s in all different colours and a wide range of different flavours, filled with milk chocolate, dark chocolate, crispy rice, mint chocolate, peanuts, almonds, orange chocolate, coconut, pretzel, wild cherry, cinnamon, raspberry or peanut butter. There is a reason why these small treats are so popular! M&M’s have been around since 1941 in the United States and one of the largest M&M’s stores is located in the heart of New York, on Times Square.

M&M’s were invented by Forrest Mars, Sr. in the ’30s, when he saw soldiers during the Spanish Civil War eat chocolate pellets (the chocolate was wrapped in a hard shell in so that it did not begin to melt). Mr Mars received a patent for his idea in March 1941 and begun immediately with the production in New Jersey. The company was originally founded at that time as M&M’s Limited. M&M’s are made of chocolate from Hershey’s Chocolate. The two-letter “M’s” stand for the name Mr Mars himself and Bruce Murrie, son of William F.R. Murrie, the owner of the Hershey’s Company.

M&M’s with peanut butter was introduced in 1954. Then, however, it was only covered in chocolate brown. All other colours and flavours of the M&Ms came much later. When the peanut butter M&M’s became success along with the slogan ‘Melts in your mouth, not in your hand’, M&M’S started to produce the chocolate in the colours red, yellow, and green. 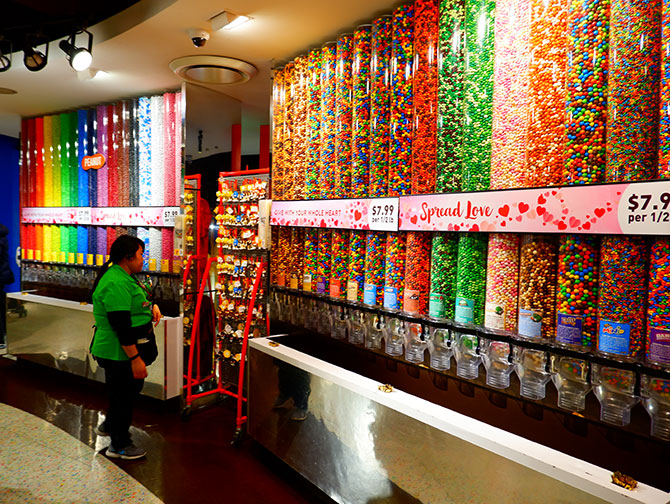 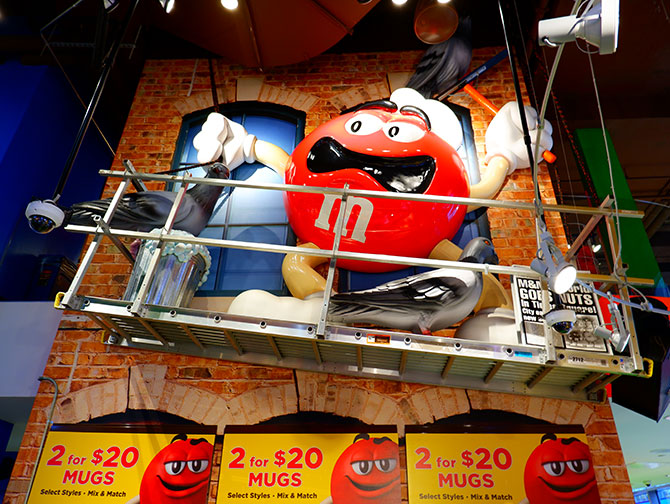 The M&M’s store was established in 2006 and is located in the heart of Times Square. The perfect place for all chocolate lovers! With nearly 25,000 feet and three floors, it offers a large variety of M&M’s products. Not only M&M’s chocolate but also products such as kitchenware, jewellery, bath products and much more. Another nice feature in the store is the personal printer. This allows M&M’s lovers to choose from a wide range of images or to create their own text and print it on the M&M’s chocolates within minutes. Visitors can get a print of “Big Apple”, “I Love NY”, the Statue of Liberty, New York Giants, New York Jets, New York Yankees, New York Mets logo and many others.

Eric’s Tip: Beware when filling up your bag of M&M’s. It might seem like you don’t have a lot, but wait until you see the price on the cash register! They have a great selection of M&M’s, but they are a little pricey.

In addition to the M&M’s Store, there are many more toy stores in New York to visit.