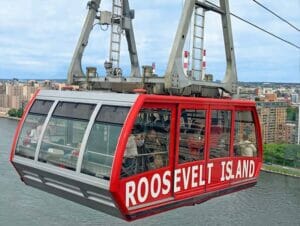 The entrance to the Roosevelt tram is at 2nd Avenue and 60th Street. The aerial tramway resembles a ski gondola. Walk up and pay with your subway pass. If you have an Unlimited MetroCard, you pay nothing extra. (You can even buy a MetroCard before you travel to New York.) The gondola/tram takes you to Roosevelt Island in four minutes. Roosevelt Island is a small island in the East River. It is a place where about 16,000 people work and live.

On Roosevelt Island, you can take a wonderful (and a quiet) walk. If you want to do this, then walk to the river and then left. There are many benches and a nice view of Manhattan. Perfect for relaxation. You can use the tram again on the way back, but there is also a subway station just behind the tram between the first apartment buildings. Another option is to take NYC Ferry. You can board on the east side of the island. It first stops at Long Island City and then continues to Manhattan. In 2002 the tram was the scene of the movie Spiderman. Want to know what to expect? Watch the film above the whole trip. 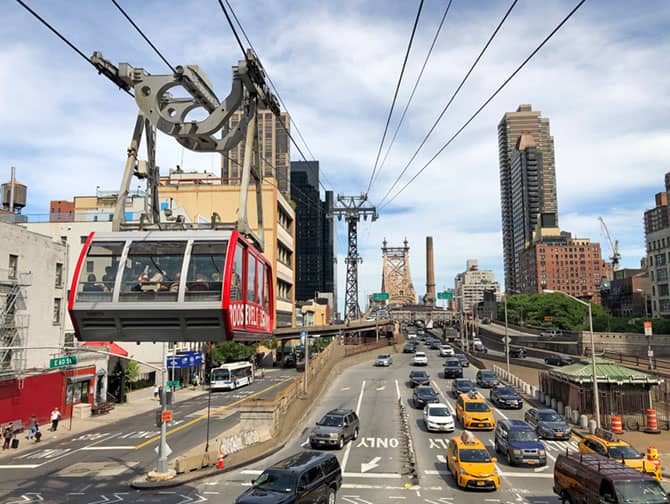 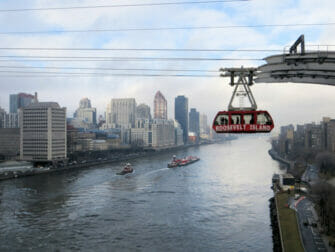 How much does it cost to go on the Roosevelt Island Tram?

A single ride costs $2.75, but it’s free with an Unlimited MetroCard.

How do you pay for the Roosevelt Island Tram?

You can pay for the ride with a MetroCard. Read more about the Roosevelt Island Tram here.

Where does the Roosevelt Island Tram leave from?

The entrance to the Roosevelt Island Tram is at 2nd Avenue and 60th Street.