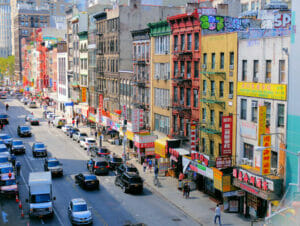 Chinatown in New York is a wonderful neighbourhood to walk through. Nowadays it’s roughly located between Broadway on the west side and East Broadway on the east, and Delancey Street and Chambers Street on the north and south. Walking around this area really feels like you’re in China for a moment.

History of Chinatown in Manhattan

Chinese have already inhabited this area since 1850, but great waves of people only moved here from 1965 onwards when the immigration laws became more lenient. Now around 700.000 Chinese live in New York. Aside from Chinatown, a lot also live in Flushing (in Queens), but Chinatown in Manhattan remains the main touristic Chinese neighbourhood in New York.

I have never been to China, but I can imagine that it might be like Chinatown: food everywhere on the streets (both during the day and at night), huge buckets of fish. Shops where you can buy remedies for all sorts of conditions. You can also get a massage in one of the many massage parlours, the prices are clearly visible and often very low. You only hear Chinese and even the McDonalds has translated its sign into those beautiful Chinese characters. The Hop on Hop off bus makes a stop here, but it’s usually rather crowded. You can also visit the Museum of Chinese in America at 215 Centre Street. I went there and although I only walked around for 30 minutes, it was worthwhile. 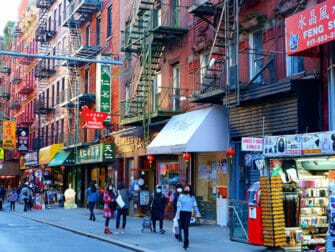 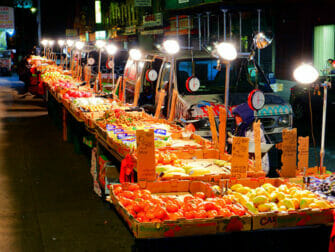 A Guided Tour Through Chinatown

If you would rather walk through Chinatown with an expert guide there are a few tours to choose from. Nothing stops you from wandering through the neighbourhood on your own, but a local guide will always be able to tell about the area’s history and current happenings in more depth. You can book a private walking tour of New York or do a group tour like the ones below.

A walking tour through SoHo, Little Italy and Chinatown shows you all the highlights of the area. You start from Spring Street in SoHo and explore the areas with a local guide. First time visitors and more experienced travellers will definitely learn something new on this tour. You’ll be surprised how much you’ll be able to see during the few hours and you’ll definitely be able to take some great photos.

If you are more interested in the food of Chinatown then the Chinatown and Little Italy Food Tour is perfect for you. The tour lasts for three hours. It takes you first to Little Italy and afterwards you’ll explore tasty Chinese specialties like dumplings and dim sum. You’ll receive a map with all the spots of the tour pointed out, so it’s easy to pay a second visit to the ones you liked most after the tour. 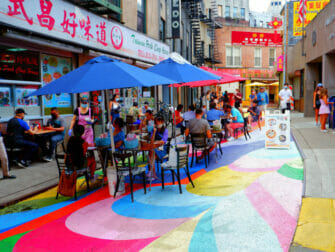 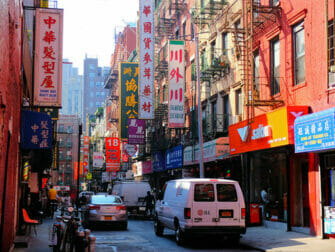 Food and Drinks in Chinatown

Of course you should enjoy the real Chinese cuisine which is available at a lot of places, but for a delicious Dim Sum go to Golden Unicorn restaurant on 18 East Broadway. Do not expect the waiters to speak English though. One important reassurance: the Chinese eat here too.

If you’d like to stay overnight in Chinatown and book a hotel here, I can recommend you the Wyndham Garden Chinatown. Two other nice options are the NobleDEN Hotel and Hotel 50 Bowery.

Eric’s Tip: Chinatown is ideal for the third day of a weekend trip to New York. Stroll around at the end of the morning and follow up with a delicious Dim Sum for lunch. And at night? Go to “Apothéke Cocktail Bar”, a hip but relaxed club on 9 Doyers Street. A nice alternative to a club in the Meatpacking District. 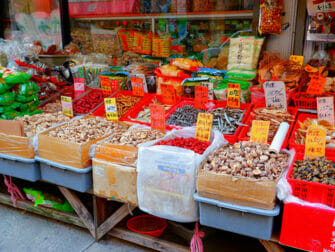 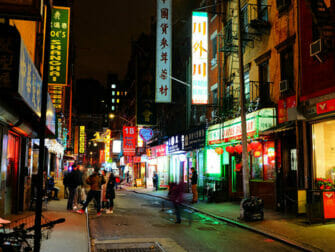