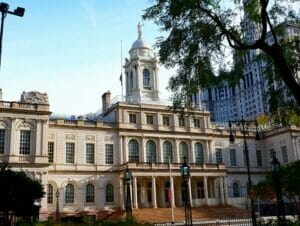 Civic Center in New York is the neighbourhood in Lower Manhattan where New York City Hall and other government buildings are located. Civic Center is bordered to the west by Broadway and Tribeca, to the north by Chinatown and Worth Street, to the east by the East River and the south by the Financial District. It is a stately neighbourhood, with many beautiful buildings in a classical style.

Law and Order in Civic Center

Civic Center can be reached with the Hop-on Hop-off buses, which stop nearby. At the heart of Civic Center is the Foley Square intersection, with a park called Thomas Paine Park in the middle. There are several courthouses around Foley Square and the name of this place is synonymous with the New York legal system. Fans of the Law and Order TV series will recognise a lot here. Chances are you will even come across a movie set of the series!

Many of the buildings in Civic Center have a classic look. Because of the high pillars and the cream-coloured stone you almost feel as if you are in Rome for a while. Some buildings that are worth seeing are the classic St. Andrew Roman Catholic Church, the impressive New York Supreme Court and of course the City Hall. The City Hall is not open to the public, but several other buildings in the Civic Center are open to enter. One of the largest government buildings in the world can also be found in this district. The Manhattan Municipal Building has 40 floors and is home to no fewer than 13 municipal institutions. After your visit to Civic Center, walk directly to the Brooklyn Bridge via the pedestrian walkway!

Eric’s Tip: Because of the many important things that take place in this area, there is security in many places. You will encounter roadblocks and security shelters, but in general, the barriers mainly affect cars. As a pedestrian, you can usually just pass it and view the buildings from different sides.

Getting married in New York

You will probably also visit Civic Center if you want to get married in New York. The New York City Marriage Bureau is located here, the place where you can get registered to marry. Those who explore Civic Center will find that most people come here for lawsuits, weddings and other “civil affairs”. They are often neatly dressed and in a different mood from the city’s visitors. Restaurants and shops are therefore hardly to be found here. Would you like a bite to eat? Then walk on to the adjacent Chinatown. 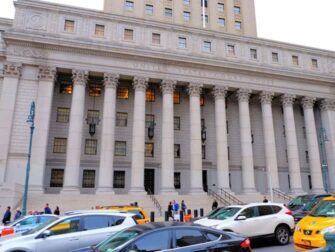