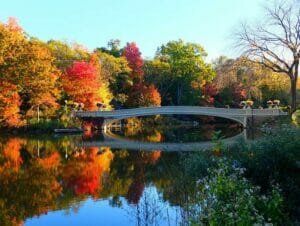 The Central Park Movie Sites Walking Tour is not only great for movie fans, but also those who want to explore Central Park in a short time. Your knowledgeable guide will tell you about the scenes of more than 30 movies shot in Central Park, as well as some of its history. There are plenty of stops for you to take photos and enjoy the beautiful Central Park. So even if you don’t know all the movies the guide mentions, you’ll still be able to relax. The tour keeps up to date with the latest movies and is rather interactive – you are encouraged to ask questions!

The tour starts at 59th Street between Fifth and 6th Avenue in front of the entrance to the 5 Av/59 St subway station. You can catch subway trains N, Q or R to that particular stop, or travel with 4, 5 or 6 to 59th Street which is a little further away. In a group of around 20 people, you will first start by naming famous buildings featured in movies. The first and most notable being the Plaza Hotel is known from Home Alone 2: Lost in New York. The tour is a great way to test your movie knowledge.

You will then leisurely stroll through the park stopping at the Wollman Skating Rink (Serendipity, The Step Mom), The Mall (Vanilla Sky, Breakfast at Tiffany’s) and the famous Bow Bridge (Autumn in New York, Keeping the Faith, Little Manhattan, The Way We Were). Though the cast-iron bridge may be the most romantic spot in Central Park (many a proposal happens here) it has less of that reputation in movies. From a distance, you will be able to see the Boathouse where the famous Carrie-Big scene in Sex and the City took place. (The pond was actually dredged in order for Sarah Jessica Parker to film the scene!) This is also the place where the final scene of The Avengers was shot. 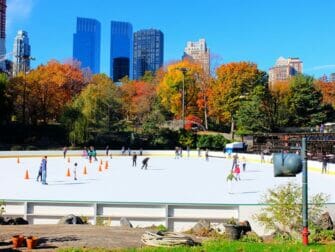 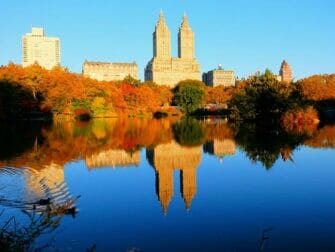 Strawberry Fields, The Dakota and Tavern on the Green

After having enough time to snap some photos you’ll head on to the Bandshell (Mighty Aphrodite, Hair) and Strawberry Fields. In 1985 a small area of Central Park (between 71st and 74th street) was dedicated to the life and music of John Lennon. It’s a popular place for fans. From Sheep Meadow you’ll be able to see The Dakota, where Yoko Ono still lives today. The tour moves on to Tavern on the Green, a famous restaurant featured in Ghostbusters and Wall Street before ending at Columbus Circle.

Eric’s Tip: This is a great way to see a lot of Central Park in a short amount of time. If you’re a movie lover then you’ll probably recognise a lot of the places. If you don’t want to walk around, you could also take the New York TV and Movie Sites Tour by bus. 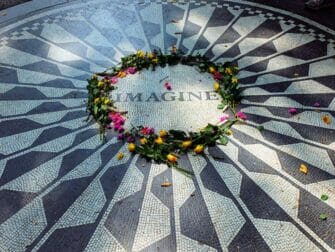 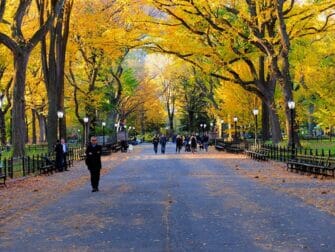 After purchasing, you will receive a voucher that you can print out or show on your smartphone as your ticket for the tour. The tour takes around 2 hours so be advised to wear comfortable shoes.