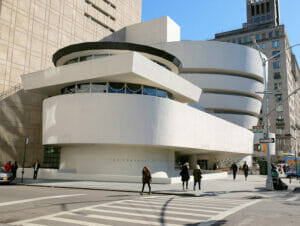 The Guggenheim in New York is a museum that exhibits (modern) art from the 1860s to the present. Its focus lays on Impressionism and Expressionism like works by van Gogh and Kandinsky, as well as modern and contemporary art. The Guggenheim also owns one of the biggest collections of Pablo Picasso’s artworks. Officially called the Solomon R. Guggenheim Museum, the art museum also houses special exhibitions and is a must for every lover of abstract art.

The Guggenheim opened its doors at its current location in 1959. The museum’s building designed by legendary architect Frank Lloyd Wright is a masterpiece in its own right. The Guggenheim building is so unique and so iconic, it’s even worth passing by if you don’t go inside.

It has been designated as a National Historic Landmark and is a UNESCO World Heritage site. The building Frank Lloyd Wright designed resembles a nautilus shell. The most noteworthy feature of the building is the upper rings which are much wider than the lower ones, giving it that otherworldly shape. It looks almost alien! But did you know it took Frank Lloyd Wright 15 years and 700 sketches to create the museum? 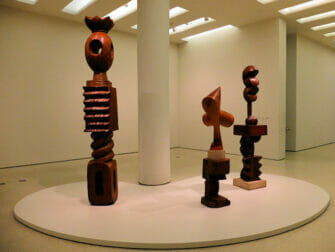 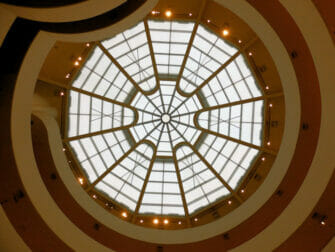 Interesting Exhibits at the Guggenheim

The Guggenheim collection was established by Solomon R. Guggenheim who collected abstract art (or non-objective art). These works were first displayed at the Museum of Non-Objective Painting in 1939 in Midtown Manhattan. The collection has early modernist works by artists such as Marc Chagall, Pablo Picasso, Vasily Kandinsky and Piet Mondrian. The collection showcases a range of art from Europe and Russia, from the second decade of the 20th century. The permanent collection also houses works by Constantin Brâncuși and his modern sculptures are often on display.

The Thannhausers were successful German art dealers at the beginning of the last century. They were known for spotting which painters were going to make it, and which were not. This allowed them to build a wonderful collection. Including, among others, Pablo Picasso, Vincent van Gogh, Georges Braque and Paul Cézanne. The Thannhausers and the Guggenheims became friends. As they had the same views on art, they gifted their entire collection of 70 works to the Guggenheim Museum. 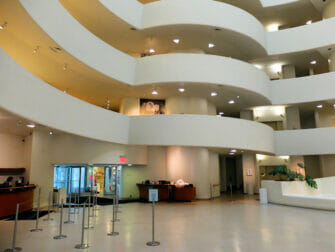 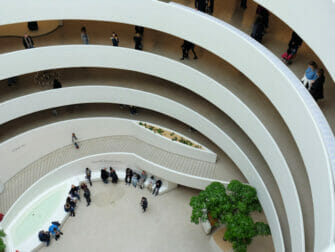 Because of the structure of the museum, it’s very easy to plan a visit that lasts 90 minutes (or less, if you’re in a hurry). Head straight to the top of the museum and start walking down the ramp. Depending on the temporary exhibition, you’ll either spend more time on the upper levels or head down to the permanent collections. It’s where you’ll be able to see the masterpieces by Picasso and Monet as well as Degas. Works by Kandinsky are also often on display.

While the MoMA boasts the more famous The Starry Night by van Gogh, the Guggenheim has the equally beautiful artwork “Mountains at Saint-Rémy” by the Dutch painter. It belongs to the Thannhauser collection and you will immediately see the artist’s handwork. If you are more into modern art, take a look at the photographs of Robert Mapplethorpe. His portraits of fellow artists and celebrities are quite interesting.

I also like to have coffee before or after I visit the museum, but not at the museum cafe. I head to the Bluestone Lane Upper East Side Café which is just down the street. Don’t forget to take some photos of the magnificent museum building before you enter or after your visit! It’s a nice spot to commemorate your New York visit, so snap a selfie or two, too!

How to visit the Guggenheim

Because the museum is quite compact, you can easily combine visiting this museum with other activities in the area. You can either go cycling in Central Park or visit one of the other museums close by on Fifth Avenue. The closest ones are the Neue Gallerie (German art) or The Cooper Hewitt (design) both of which are housed in former New York mansions.

The museum has a cafe called Cafe 3 as well as a restaurant on the ground floor (88th Street) called The Wright (named after Frank Lloyd Wright). It’s good but rather small. Cafe 3 has a view of Central Park, it’s quite secluded so easy to miss.

Also, pay a visit to the Guggenheim museum shop on the first floor before you leave. It offers a big variety of prints, postcards and everything else you need (or don’t need) if you are an art aficionado. The Guggenheim Store was even awarded the title of “Best Museum Store”! There is usually also the lego version of the Guggenheim for sale if you want to take the whole building home.

Eric’s Tip: For me the Guggenheim is an uncomplicated museum because of the design. I don’t need to worry about getting lost! Because works of art are dotted around the staircase (depending on the exhibition) it’s an easy museum to navigate. Don’t forget to take the iconic photo at the top of the museum!

If you want to know more about the art of the Guggenheim Museum, take a private guided tour! With this 2 hour-long tour, you experience the highlights of Guggenheim and can ask the art expert everything you want to know. That way, you don’t have to worry about missing an important piece. And you might finally find out what Kandinsky wanted to tell his audience. Another plus is that you get the skip the line access with this tour. The maximum number of participants is 10 people. So the guide is able to answer every question and you won’t have to worry about walking around in a big group of people.

The Guggenheim museum is accessible by wheelchair, except for the High Gallery. The toilets on level 1 and 7 are accessible for those with disabilities and the elevator can be used for the rotunda. Strollers are allowed inside the museum and there are even dedicated stroller tours if you want to bring the little ones!

Large backpacks are not allowed in the museum, they must be left at the cloakroom. A small backpack may be brought inside, provided that it is worn on the front or side. Photography is permitted for personal use but the use of a tripod is prohibited. You can bring pencils and sketchbooks with you.

Getting tickets for the Guggenheim

Buy your tickets online, so you can gain entrance quicker than if you would buy tickets on the spot. It’s a popular museum in New York, so lines are usually long, especially in high season.

Entrance to the Guggenheim is also included with all discount passes for New York.

What is the Guggenheim museum famous for?

The Guggenheim Museum houses an extraordinary collection of modern art in a breathtaking building. Read more about it in in this article.

Is the Guggenheim Museum free?

It’s recommended to buy tickets for the Guggenheim in advance online as queues can be long.

How much time should you spend at the Guggenheim?

You could spend of course a whole day at the Guggenheim but depending on the exhibitions, 1.5 to 2 hours is a good start.

How much does the Guggenheim cost?

There are different ticket categories available at the Guggenheim museum. Save money with a discount pass!