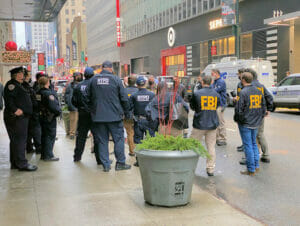 According to FBI data New York is considered the safest large city in the United States. On the ranking of cities with the highest crime rates, the city does not even make the first 200 results. The crime rate in New York has drastically decreased in the past decade and crimes against tourists are rare. Even so, in busy places pay attention to your belongings. Safety in New York, as with all large cities in the world does come with some pointers. Read on for my tips.

Do not wave your city map around or visibly wear your camera. Keep valuable items in the safe at your hotel. Pickpockets are mostly active at Grand Central Station, Port Authority and Times Square. Be vigilant of your wallet, especially in large crowds.

It is not advised to travel alone at night on the subway, and do not go through Central Park. Instead, opt to take a taxi door to door. In addition, always use a marked official NY taxi cab when travelling.

Try not to carry too many of your possessions on your person whilst sightseeing, use your hotel room or a luggage storage facility to securely store your bags when in New York.