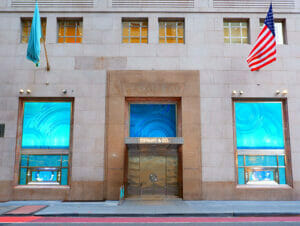 Tiffany & Co. in New York has its flagship store on Fifth Avenue. Tiffany & Co. known around the world for their iconic blue box with its white ribbon: A symbol of style and luxury. Almost every woman dreams of getting that Tiffany-blue box with the famous diamond engagement ring one day!

Tiffany’s is an American multinational corporation, selling luxury jewellery and silverware. In 1837 the New York company, then known as Tiffany, Young & Ellis, began selling stationery and luxury items. When Charles Tiffany took the helm, in 1853, the name was changed to Tiffany & Co. Since then, the main focus became the jewellery.

Charles Tiffany really put Tiffany’s on the map when he purchased a huge 287 carat, yellow diamond. This stone was cut into the famous 128 carats Tiffany Diamond. Furthermore, this diamond is on permanent display in the flagship store on Fifth Avenue, New York. The stone attracts thousands of visitors each year. The Tiffany Diamond is seen as a symbol of Tiffany’s beautiful diamond legacy, in addition to their impeccable craftsmanship.

Tiffany & Co. has stores all over the world. The most famous being their flagship store which can be found on Fifth Avenue, in New York City. The store opened in 1940 but didn’t become internationally famous until the American classic movie ‘Breakfast at Tiffany’s’ (1961) was released. In the film, Holly Golightly (played by Audrey Hepburn) enjoys her breakfast in front of the windows of Tiffany’s. Tiffany’s is, according to Holly ‘the best place in the world, where nothing bad can take place’.

Due to to the role that Tiffany & Co. played in ‘Breakfast at Tiffany’s’ a lot of tourists head to the Fifth Avenue store to re-enact the iconic moment, or simply to admire the dazzling windows and displays the store is famous for.

You can find Tiffany & Co. New York flagship store on the corner of Fifth Avenue and 57th Street, close to the Apple Store. As this building is currently being renovated, the temporary location is around the corner, at 6 East 57th Street.

Eric’s Tip: Tiffany’s on Fifth Avenue is close to Central Park, so it’s nice to combine with a walk or bike ride through the park. It’s also a perfect place for a fancy bathroom break. 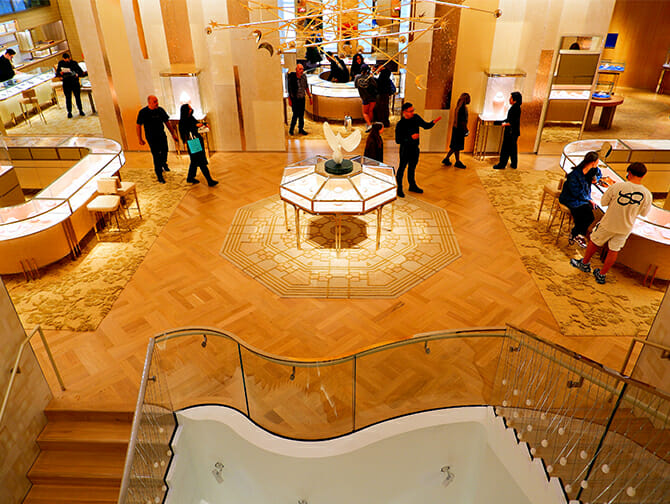 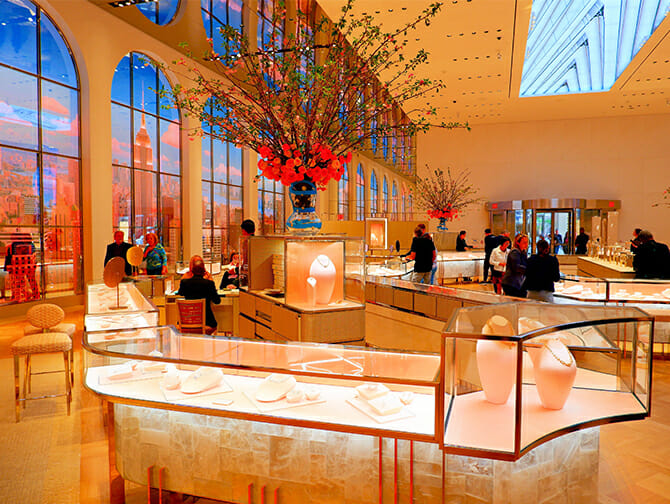