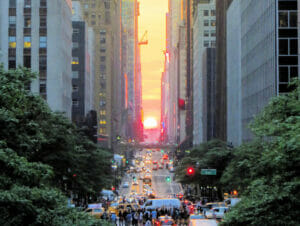 Manhattanhenge, or the Manhattan Solstice as it’s also called, is a popular astronomical phenomenon in New York. It takes place twice a year when the sun perfectly aligns with the street grid of Manhattan. Tens of thousands of people pour into the streets, even stopping traffic, to capture the rare moment.

Manhattanhenge is an astronomical phenomenon where the sun sets directly over Manhattan’s east-west streets. It turns the skyscrapers into walls around the sun as it sets directly in the centre. Twice per year, this happens: once before the summer solstice and once after. Additionally, two half sun Manhattanhenges occur, which means that the phenomenon is possible to observe on four days per year in total.

It has, of course, happened for as long as Manhattan has had its grid system. However, it only became a widely known event in 2002 after the astrophysicist Neil deGrasse Tyson drew attention to it. Tyson is the director of the Hayden Planetarium, part of the American Museum of Natural History. He was also the one coining the term Manhattanhenge.

The dates of Manhattanhenge vary since they depend on the summer solstice. It does, however, happen around the 30th of May and the 12th of July. The next Manhattanhenge falls on ....

The full sun sets on the grid approximately 21 days before and after the summer solstice, offering the most sought-after effect. However, there’s also the half sun Manhattanhenge. Here half the solar disk is above the horizon and the other below. That also happens twice: the day before the first full sun Manhattanhenge and the day after the second. Similarly, the sun rises perfectly aligned with the street grid twice a year around the winter solstice. That takes place in December and January, and some call this the Manhattanhenge sunrise or the reverse Manhattanhenge.

Where to view Manhattanhenge

You can observe Manhattanhenge from many places on the east-west streets of the Manhattan street grid: as far south as 14th Street and as far north as Washington Heights. The best places to watch Manhattanhenge are wide streets with an unobstructed view towards New Jersey across the Hudson River. New York does, of course, also have its fair share of iconic buildings with the potential to frame your snap beautifully. 34th Street near Empire State Building and 42nd Street near Chrysler Building, as well as the Tudor City Overpass make for particularly photogenic spots. 14th, 34th, 42nd and 57th Streets are generally good spots since they are wide streets.

Manhattanhenge draws large crowds, especially around the city’s landmarks, so finding a good place to take photos can be difficult. There’s also the risk of clouds ruining your picture-perfect snap. The weather in New York can be quite temperamental, and even on a nice summer day, the clouds may sweep in and hide the sun.

If you’re looking to avoid the big crowds, then go for a less popular photo spot. You could also simply choose another day. Although the alignment isn’t as perfect as on the Manhattanhenge dates, you can still get some very nice shots on the days before and after.

Eric’s Tip: I’m not a big fan of Manhattanhenge. In my opinion, you can experience a similar view on many other days, so I don’t think it’s such a special event. It’s mostly interesting for visitors who want to photograph it. Generally speaking, New Yorkers aren’t very impressed with it. I think New York offers so many other fantastic views and opportunities for great sunset snaps all year round. For instance, visit Top of the Rock around sunset for breathtaking and highly Instagram-worthy views. 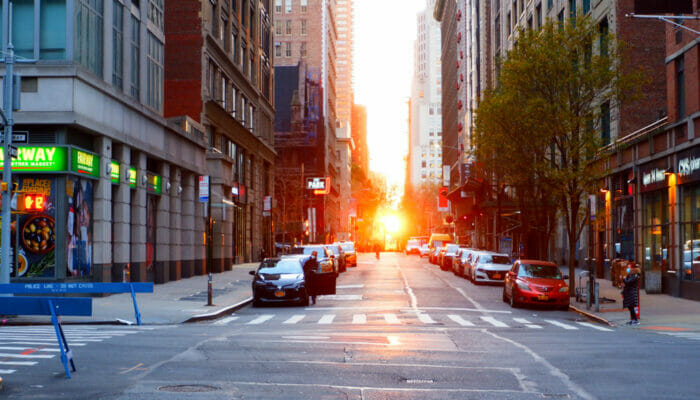