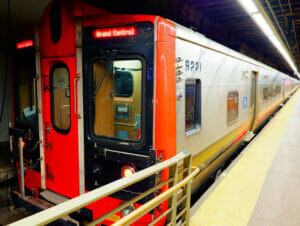 Metro-North Railroad (MNR) in New York is a train network that connects New York City with upstate New York. It also connects New York to Connecticut and some of the lines go through a part of New Jersey, towards another part of New York State. The MNR is an element of the MTA and consists of five lines. Depending on the line, the trains run from early in the morning until late at night. With Metro-North Railroad you can travel to places like New Haven, Poughkeepsie or you can take a train to the New York Botanical Garden and The Bronx Zoo. With more than 70 million travelers annually, it is one of the busiest rail networks in the United States.

Three of the five lines stop at Grand Central Terminal, the other two lines depart from Penn Station. The Hudson Line, the Harlem Line, and the New Haven Line depart from Grand Central and then, via Harlem – 125th Street, head to the north of New York State or Connecticut.

From Penn Station, it’s possible to take the Pascack Valley Line or the Port Jervis Line. These lines allow you to travel, via New Jersey, to the part of New York State northwest of Manhattan. These lines are an element of New Jersey Transit. Please note that you have to make a transfer at Secaucus Junction station when traveling on either of these two lines. 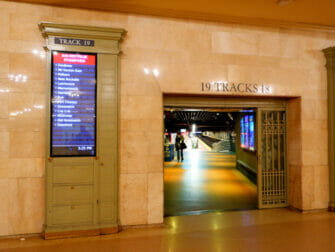 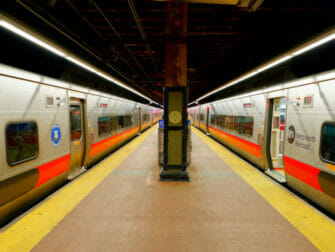 Tickets for Metro-North Railroad can be best bought at the station where you get on. No reservation is required, as is the case with Amtrak. At Grand Central Terminal you can go to a counter or one of the ticket machines. The counters are located on the sides of the iconic terminal, above which it says ‘MTA Metro-North Tickets’. These counters are open from morning to evening. The ticket machines are always available. Tickets for MNR can be bought at the gray and red machines.

When you want to buy a ticket, you need to know whether you are traveling during peak hours or during off-peak hours. These peak fares apply on weekdays when you depart from Grand Central between 6:00 and 9:00 or between 16:00 and 20:00. Or when you arrive at the station between 6:00 and 10:00. Off-peak rates apply at all other times, weekends and holidays. 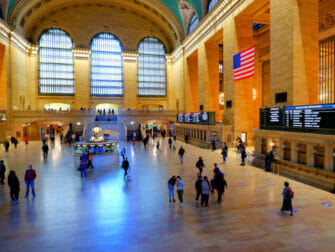 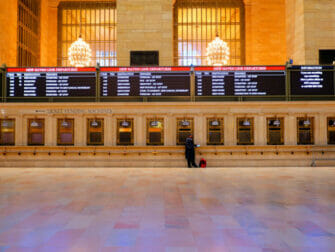 Metro-North Railroad’s trains are regular trains that stop at each station. The Hudson Line, the Harlem Line, and the New Haven Line go east of the Hudson River and in the direction of Stamford in Connecticut and Yonkers and White Plains in New York State. The Pascack Valley Line and the Port Jervis Line pass a part of New Jersey, making them part of New Jersey Transit. The trains arrive at Spring Valley or Port Jervis in New York State. View on the map which train you can take.

Eric’s Tip: The Hudson Line is one of my favourites. After boarding at the iconic Grand Central, the train travels north along the Hudson River to Poughkeepsie. If you sit on the left, you have beautiful views of the Hudson Valley and see a completely different part of New York State. 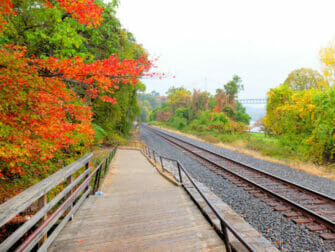 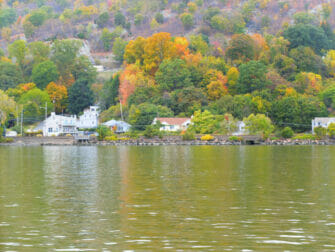 To the Yankees with MNR

If you are going to a Yankees game during your trip to New York, you can take a Metro-North train to get to the stadium. On days when the Yankees are playing, it’s possible to use the ‘Train to the Game’ service. These shuttles run from Grand Central Station to 153rd Street, where Yankee Stadium is a few minutes walk away from.

Visit The Bronx Zoo or the Botanical Gardens with MNR

The MNR lines are perfect if you want to explore New York further. When the weather is good, it’s nice to visit The Bronx Zoo or the New York Botanical Garden. If you take the Harlem Line you can get off at Fordham station, then walk 10 minutes to the zoo. One stop further is Botanical Garden station, from where you can easily walk into the gardens.

How much does a Metro-North Railroad ticket cost?

The price of your Metro-North ticket will be determined depending on when you travel, where you are going, and whether it is a one-way or round trip. Read more here.

Where can I board the Metro-North trains?

In Manhattan, you can get on at Grand Central Station to take an MNR train. From here go the Hudson Line, the Harlem Line, and the New Haven Line. When heading to New Jersey, get on at Penn Station.

Where can I buy Metro-North Railroad tickets?

Tickets for Metro-North Railroad are best purchased at an information desk at the station or at the red or gray ticket machines. Learn everything here.

Do I need to book Metro-North Railroad tickets?

No, you do not need to book Metro-North Railroad tickets online, but can purchase them from a ticket office or vending machine at the departure station.