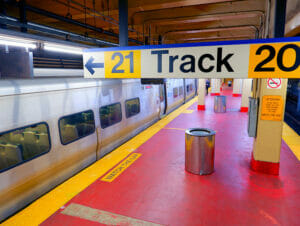 Penn Station in New York is short for Pennsylvania Station. Penn Station is located in Midtown Manhattan on Pennsylvania Plaza, which is also home to Madison Square Garden. It is the busiest train station in New York City, and even in all of North America. As many as 600,000 passengers visit this station every day, with the Amtrak, Long Island Rail Road and New Jersey Transit trains arriving. Six metro lines stop here as well.

Penn Station is centrally located in Manhattan. The station is mainly located underground, below Madison Square Garden. There is no specific address of Penn Station, but the block where the station is located between 7th and 8th Avenues on the west and east sides and 31st and 33rd Streets north and south. It is two blocks from the Empire State Building and also near Macy’s, among others. Are you in New York and looking for the station? Then use the map in my free Eric’s New York app.

Pennsylvania Station gets its name from the Pennsylvania Railroad railroad company, which had the station built-in in 1910. The construction of the station also marked the arrival of the first direct train connection between New York and the south of the country. The original Beaux-Arts station was demolished in 1963 after plans for the revamped Penn Plaza and Madison Square Garden were announced. The station remained mostly underground after that, with Madison Square Garden above it.

Penn Station’s latest development is the extension with the Moynihan Train Hall. This hall was built in the James A. Farley Building across the street, where a post office is located as well. The hall is named after the initiator of the station extension: Senator Daniel Patrick Moynihan. The Moynihan Train Hall is an impressive part of the station, where both Amtrak and LIRR trains come in. The construction of a pedestrian connection with the High Line is still planned for the future.

Eric’s Tip: The Moynihan Train Hall is located in the building of New York’s former main post office. It is a beautiful classic building, which I like to walk into to have a look around. Now that Amtrak owns the building, the post office share is a lot smaller, but it is still a beautiful building to check out.

Long Island Rail Road (LIRR for short) is the rail company connecting New York and Long Island. LIRR consists of several lines, most of which only operate on Long Island. However, one of the lines goes to Penn Station. This is the train that runs from Jamaica Station in Queens to Manhattan, and that you can use for your transfer from JFK to Manhattan.

New Jersey Transit is responsible for the rail connections in New Jersey. Several of these lines go under the Hudson and start/end at Penn Station. Three of these lines also pass through Newark Airport, allowing you to travel from Newark to Penn Station by train when your flight arrives here. 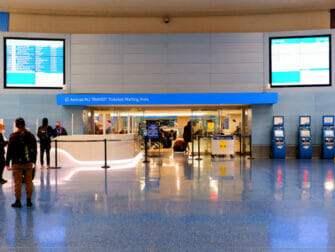 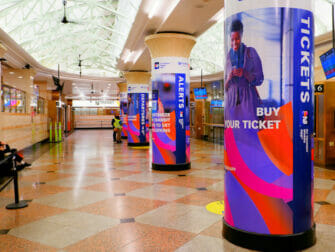 As a visitor to New York, you probably won’t need to be at Penn Station. The other two public transportation hubs in New York, WTC Transportation Hub and Grand Central Terminal, are an attraction in themselves and always worth a visit, even if you don’t need to take a train or subway here. This does not apply to Penn Station, this station is mainly practical and not an attraction. An exception to this is the aforementioned Moynihan Train Hall. With its large glass ceiling and impressive escalator, this is worth a look if you are in the area.