The Rockefeller Christmas Tree has arrived in New York! 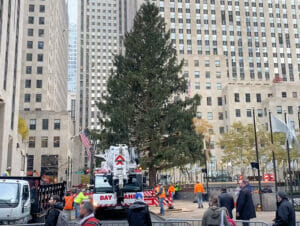 The Rockefeller Christmas Tree symbolises the Christmas spirit in New York. The Rockefeller Tree made its debut in 1931, when construction workers working on Rockefeller Center set up a small six meter tall tree. Two years later, the first official tree followed and in 1936 the famous skating rink was added.

Finding a suitable spruce is quite a quest. This year, the chosen tree comes from the town of Oneonta, which is located about 270 kilometers north of Midtown Manhattan. To make this choice the ‘head gardener’ at Rockefeller Center personally visits various trees. Sometimes even several times a year to see how a tree develops. Typically the trees are spruces from New York, or the surrounding states of Connecticut, Pennsylvania, and New Jersey. Sometimes, however, they also come from much further. The 1998 tree was even flown in from Ohio using the world’s largest transport plane. Based on the height (minimum 75 feet / 23 meters), shape and fullness, the best tree is chosen, which is cut down in early November and loaded onto a truck bound for New York City.

Want to stay up to date with all the news from New York? Sign up here.

The tree’s arrival at Rockefeller Center in mid-November is already quite a big event, usually attracting crowds of spectators. Then the tree is hoisted up and decorated with 50,000 lights in a few weeks. On the top is a star, covered with Swarovski crystals. The current star is a design by architect Daniel Liebeskind, which has been in use since 2018. No less than 3 million crystals are attached to the 70 spikes! Due to all this glitter, the star weighs over 400 kilos.

On December 2nd, the Rockefeller Tree Lighting will take place and the lights in the tree will be turned on. This takes place during an elaborate ceremony with many performances, which is broadcasted on TV. Normally this happens in the presence of millions of live spectators, but of course that will be slightly different this year. What does not change is that tourists and New Yorkers can enjoy the Christmas spirit that the tree brings until the beginning of January.

And even after the lights have gone out in January and the tree has been removed, it still provides warmth. It is given a second life as wood that is used in the construction of houses for Habitat for Humanity, an American foundation dedicated to housing for everyone.