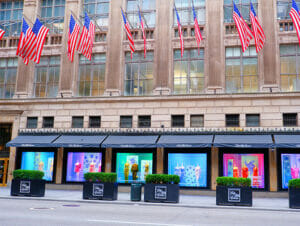 Shopping on Fifth Avenue is a New York dream of many. Starting north of Washington Square Park in Greenwich Village and running all the way to 143rd Street in Harlem Fifth Avenue spans a large area. The most well-known stretch is between 49th and 60th Streets, one of the most expensive places to shop in the world! Most Hop on Hop off bus tours offer a stop on Fifth Avenue, so you can combine shopping with sightseeing.

A lot of prestigious and high-end stores can be found between 49th and 60th Street on Fifth Avenue. Wealthy New Yorkers have shopped here since 1906, consequently, it’s where you’ll find the big brands and chic boutiques. The street has also been featured in films like ‘Breakfast at Tiffany’s’ and in shows such as ‘Gossip Girl’ and ‘Sex and the City’! Some of the luxury stores on Fifth Avenue include Louis Vuitton, Gucci, Rolex, Dolce & Gabbana, Prada, Armani, Fendi, Versace, Bottega Veneta, Cartier and Jimmy Choo.

Here are the addresses of the most famous stores:

The iconic department store, known for its superior assortment of American and international designer collections. The flagship store opened on Fifth Avenue in 1924.
Address: 611 Fifth Avenue

Every woman knows the blue boxes with the white ribbon containing the engagement rings! Tiffany & Co New York has been the go-to jeweller for many couples since 1837.
Address: 57th Street & Fifth Avenue 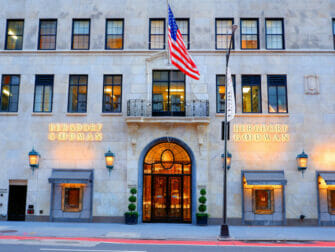 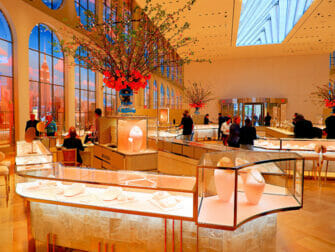 A large department store featuring a whopping eight floors full of exclusive designer fashion. There are a wide range of brands available, such as Chanel, Prada, Chloé and Marc Jacobs. The department store also has a restaurant and a café.
Address: 754 Fifth Avenue

Celebrities such as Gwyneth Paltrow, Anne Hathaway and Natalie Portman are often spotted on the red carpet dripping in jewels from Harry Winston. It is no surprise therefore that this store is also known as the jeweller of the stars!
Address: 718 Fifth Avenue

Other Buildings on Fifth Avenue

Fifth Avenue is about more than just shopping, there are also a number of famous buildings dotted along the avenue. Visit places such as the Flatiron Building, Empire State Building, New York Public Library, Rockefeller Center, St. Patrick’s Cathedral and Trump Tower.

The section on the west side of Central Park between 82nd Street and 105th Street is also known as the Museum Mile. A number of museums located next to each other can be found here. Most noteworthy, the Solomon R. Guggenheim Museum (88th Street). Every June the Museum Mile Festival takes place to promote the museums and increase visitor numbers. During the Museum Mile Festival entrance to the ten museums, including the Metropolitan Museum of Art, is free.

In addition, Fifth Avenue has traditionally been used for the festive parades that take place in New York City such as the Macy’s Thanksgiving Parade.